‘Wonkwang, Make into One ‧ To the World ‧ To the Future!’

‘Wonkwang, Make into One ‧ To the World ‧ To the Future!’ 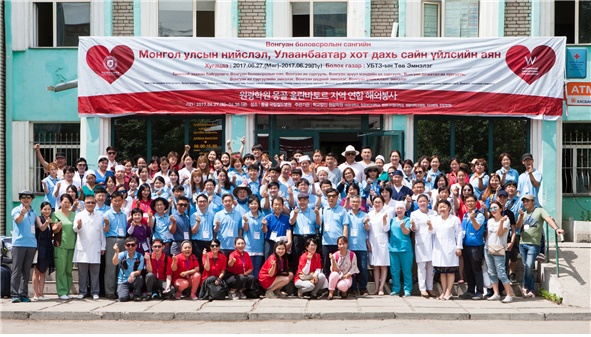 Wonkwang Academy (Chairman Shin Soon-cheol), a school corporation, has been involved in volunteer activities in Genghis Khan's country Mongolia as part of the 'Humanitarian Relief Project'.

Especially, for the severely ill patients, the united volunteers conducted the surgery directly with the Mongolian medical staff and conducted health and healthcare services such as eyeglass manufacturing and beauty (scalp, hair, nails).

In order to get medical treatment, the local response to the united volunteers was so hot that the traffic was paralyzed every day from the dawn of the day, and they were introduced throughout Mongolia through various TVs and newspapers.

Head of the united volunteers, Mo Chan-won (Wonkwang Academy Corporation) and professor Seo Il-yeong (Wonkwang University Hospital) said "Mongolia and our institute have been closely cooperating with each other since the government participated in the Korea-Mongolia project. We plan to continue to carry out this large-scale medical service, which started last year, to contribute to the promotion of friendship between the two countries beyond the level of civilian exchanges.”

In addition to railway hospitals, Wonkwang University Hospital maintains cooperative relations with hospitals such as Mongolia's No. 1 Hospital, No. 2 Hospital, National Cancer Center, Maternal and Child Health Centers, and Trauma Centers. Mongolia has been contributing to improving the medical level of Mongolia by promoting the medical personnel training project in Mongolia.

Professor Seo Il-yeong received the Honorary Doctorate from the Mongolian Academy of Medical Sciences for the first time in Korea in 2014.

Wonkwang Health Science University (President Kim In-jong), who has played a major role in the planning of the joint service activities and the linkage with the local institutions, has been participating in the Wonkwang Academy of Korea since 2011 through an MOU with the Mongolian National Medical Research Institute, Mongol Railway Hospital, Mongolia has been involved in the establishment of an international cooperation network. In 2015, the Ministry of Health and Welfare opened a joint department of Mongolian ACH Medical University in Mongolia to develop medical technology manpower and public development assistance project (ODA, Official Development Assistance).

In accordance with this, Wonkwang Academy will provide a wide range of educational and welfare services as well as medical fields. Through its cooperation with governments, public institutions and universities around the world will play a leading role in building a cooperative education model.